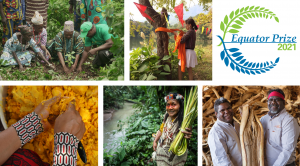 Adhimalai Pazhangudiyaner Producer Company Limited and Snehkunja Trust are among the 10 awardees of the prestigious Equator Awards 2021 For his work in the field of conservation and biodiversity. UNDP awards biennially to recognize community efforts to reduce poverty through the conservation and sustainable use of biodiversity.

Adhimalai Pazhangudiyaner Producer Company Limited 1,700-member cooperative, Managed and run entirely by indigenous people Nilgiri Biosphere Reserve Its work in Tamil Nadu and over the past eight years has improved livelihoods in 147 villages by processing and marketing a diverse range of forest products and crops.

Snehakunja Trust has protected sensitive wetlands and coastal ecosystems in the Western Ghats and Karnataka Coast 45 years With a focus on community-based restoration and conservation.