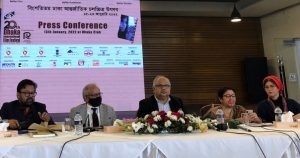 20th Dhaka International Film Festival begins at Dhaka, Bangladesh. The festival will showcase 225 films under 10 categories from 70 countries, which will be screened at various locations in Dhaka. January 15-23. The film festival is being organized in a hybrid mode, with multiple films being streamed online during the festival. DIFF will also organize 8th edition ‘Women in the Cinema’ International conference, as well as the fourth edition of the ‘West Meets East’ Screenplay Lab during the festival.

History of the festival: