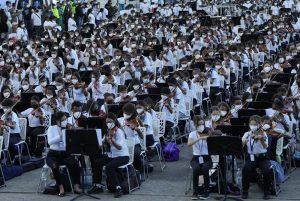 Venezuela a new set Guinness World Record for the largest orchestra with 8,573 musicians Playing together for more than five minutes. The record was set by country National System of Youth and Children’s Orchestras, Is known “System”. The previous such record for an orchestra was set by Russia when 8,097 musicians played together in St. Petersburg.

The broadcast included a recording from Guinness World Records expert Susanna Reyes announcing that the Venezuelan musician had succeeded in setting a new record after Pyotr Tchaikovsky played Lamarche Slave for more than five minutes.