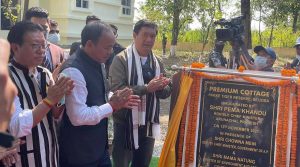 the government of Arunachal Pradesh approved Declaration on ‘Pucca Tiger Reserve 2047 Climate Change Resilient and Responsive Arunachal Pradesh’, The aim of which is to promote “climate-resilient development” in the state. This announcement is the first of its kind by any state government in the country.

For the first time, the state cabinet meeting was held outside the capital Itanagar in the Pucca Tiger Reserve, where ‘package declaration’ was adopted. The ‘Pucca Declaration’ focuses on a multi-sectoral approach to low emissions and climate-resilient development based on five broad themes, or Panch Dharas.