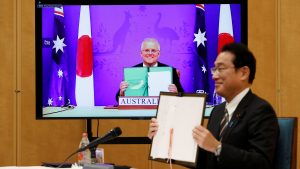 leader of Japan and Australia signed a “bordermark” Defense pact that allows closer cooperation between their armies and stands as a reprimand of china increasing assertiveness in Indo-Pacific region. Australian Prime Minister Scott Morrison and the Japanese prime minister fumio kishida They met in a virtual summit to sign a reciprocal access agreement, the first such defense agreement signed by Japan with any country other than the United States.