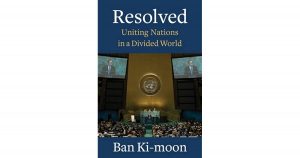 In ‘Resolved: United Nations in a Divided World‘, published by HarperCollins India, Ban described how he went from a “child of war” to a “man of peace”. Former Secretary General of the United Nations Ban Ki-moonHis first diplomatic posting was in India, and they developed such a special relationship that even 50 years later, they tell the Indian people that half their “heart is in their country”.