According to the first advance estimates of national income released by the National Statistical Office (NSO) on Friday, government consumption expenditure and overall investment for FY 2021-22 (FY22) are projected to cross the pre-pandemic levels of FY20. However, household spending and consumption have still not reached that level.

This indicates that despite a strong recovery from the previous fiscal’s contraction in FY22, consumption recovery has not been broad-based.

“It basically reflects the role of fiscal policy in reviving growth. Through a combination of fiscal devolution and real spending, the government is taking a more active role, said Rahul Bajoria, India’s chief economist at Barclays. 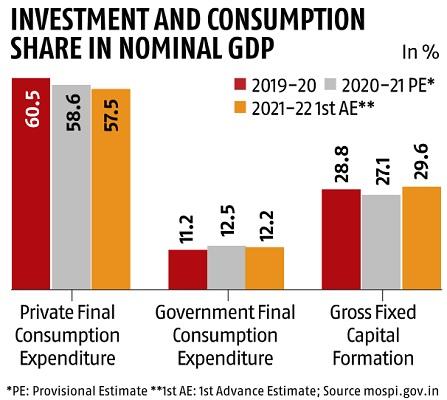 Analysts said with sluggish private investment and states focusing on welfare schemes instead of capital expenditure, the estimate for FY22 could turn out to be unfounded.

“The fact that private consumption is still relatively weak is probably an indication that there is still some lull in labor markets,” Bajoria said.

State Bank of India Chief Economic Adviser Soumya Kanti Ghosh said private and government consumption expenditure is likely to see higher growth, mainly due to the lower base of the previous year.

“Even investment demand, which took the biggest hit with double-digit contraction last year, is expected to see a strong growth of 15 per cent. However, the increase in inventory implies that demand still has to pick up meaningfully. Even imports have grown more than exports, which means more domestic absorption and investment demand,” Ghosh said.