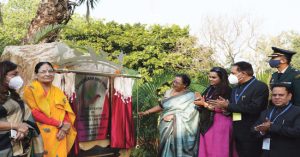 Center has given new approval Rajya Sainik Board (RSB) For Ladakh. The Board will be an effective link between the Center and the Ladakh administration. Rajya Sainik Board Will act as an advisor on matters relating to Ex-servicemen, war widows, widows and non-combatants, including serving soldiers and their dependents. The Zilla Sainik Welfare Offices of Leh and Kargil will function under the newly formed Rajya Sainik Board.