With traders and importers strongly opposing the tight stock limits on pulses imposed earlier this month, the Center today relaxed certain limits for wholesalers and retailers and a few days after they were implemented for importers. Removed it completely inside.

There has been no change in the stock holding limit for retailers which has been kept at 5 MT.

Small pulses like rajma, chickpea, lobia (black-red eye beans), peas and moth have also been kept out of the purview of stock holding limit.

As per the revised order, wholesalers can now stock up to 500 tonnes of pulses provided a variety does not exceed 200 metric tonnes.

Earlier, in the order issued on July 2, wholesalers could keep only 200 tonnes of pulses. (See the list)

In addition, millers can now hold stock equivalent to their last six months’ production or 50 per cent of annual installed capacity, whichever is higher. 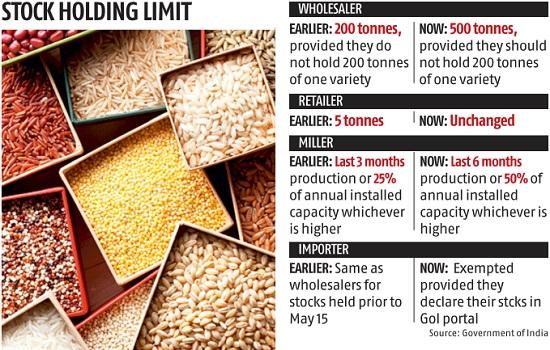 Earlier, millers could hold stock for three months of their production or 25 per cent of annual installed capacity, whichever is higher.

“The relaxation will have a down-streaming effect for millers in terms of assuring farmers at this crucial juncture of kharif sowing of urad and tur,” an official statement said.

It said that due to crackdown on pulse hoarders, in two months around 8343 registrations of stock have been done on the official portal, while stocks of around 3 million tonnes have been declared.

The official statement also said that due to various measures initiated by the government in the last few months, the wholesale prices of all pulses except lentils have declined by 3-4 per cent in the last two months and the retail prices in the same period. has declined. Up to 2-4 months.

Earlier this month, Food Secretary Sudhanshu Pandey had said that despite the fall in prices in the last two months, the cap on stock of pulses has been imposed as rates in the retail market are still higher than last year.

“This is good news for the industry and a good decision taken by the government. The market may go up due to the increase in the stock limit. But we must understand the government’s initiative to control the prices, which is a good reason. Since this news was broken. Monday, which is the beginning of the week, the market may correct, but for a limited time, as they have to liquidate the stock within 30 days. Matar, Kabuli Chana, Moth, Cowpea Good news for Rajma,” said Rahul Chauhan, of iGrain India, a commodity trading and research firm.

Bimal Kothari, vice-president of the Indian Pulses and Cereals Association, said the easing of stock limits would facilitate smooth supply in the coming months and stabilize prices during the upcoming festive period.

Business Standard has always worked hard to provide updated information and commentary on events that are of interest to you and have wider political and economic implications for the country and the world. Your encouragement and constant feedback on how to improve our offering has further strengthened our resolve and commitment to these ideals. Even during these difficult times arising out of COVID-19, we are committed to keeping you informed and updated with relevant news, authoritative views and sharp comments on relevant issues.
However, we have a request.