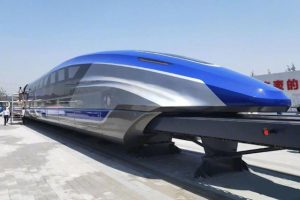 China Unveiled maglev train capable of a top speed of 600 km/h The maximum speed will make the train a self-developed by China and built in the coastal city of Qingdao, the fastest ground vehicle globally. using the electromagnetic force, The maglev train “leverages” above the track without any contact between the body and the rail. China has been using the technology on a very limited scale for almost two decades.