With daily Covid cases touching nearly 200,000 in less than a fortnight, India’s positivity rate has also increased from 1 per cent on December 30, 2021 to over 11 per cent on Wednesday. According to health ministry data, the number of districts with a positive rate of more than 5 per cent has increased nearly four times in the past one week, from less than 80 on January 11 to less than 300.

There are eight states where there has been a rapid increase in the weekly case and positivity rate in the last one week. In Maharashtra, West Bengal, Delhi, Karnataka, Uttar Pradesh, Tamil Nadu, Kerala and Gujarat, active cases have increased between six-fold and eleven-fold.

For example, Bihar and Madhya Pradesh have seen an eleven-fold increase in active cases in the last one week. There has been an increase of 9.6 in active cases in Rajasthan. Among the districts of concern, Kolkata has a weekly positivity rate of over 60 per cent.

“Metropolitan data make it clear that Omicron is rapidly replacing Delta in India. But Delta hasn’t completely gone away. However, we should not treat Omicron as a common cold. One of the reasons why its impact has been mild is that vaccination has happened,” said VK Paul, chairman of the National COVID Task Force and member-Health NITI Aayog, while addressing a weekly media briefing on the COVID situation in India.

Citing a study by the New York State Department of Health, the health ministry said that as of December 13, 2021, fully vaccinated people were about 78 percent less likely to be infected than uninfected people.

The government also assured that the country is in “very good shape with respect to testing capabilities”.

India has the maximum capacity to manufacture 9.7 million such test kits per day. Kits like OmiSure developed by Tata MD have been tested and validated by ICMR-National Institute of Virology for omicron cases detection and will be rolled out soon. 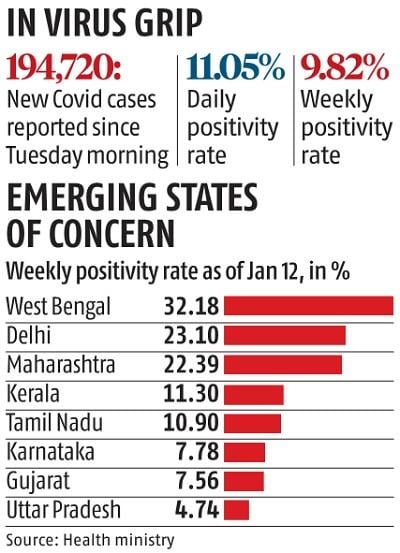 The government has warned against overuse and misuse of certain drugs in the treatment of COVID, such as steroids and the use of several other drugs that are not part of the national COVID treatment protocol.

Officials also warned against the largely irrational use of Merck’s antiviral drug mollupiravir. After extensive debate on the issue, the National Expert Group on COVID Treatment Protocol has said that the drug has certain risks that warrant caution. The expert committee has said that its known and unknown disadvantages far outweigh the claimed benefits.

Giving details of the position of the expert group on the matter, Bhargava said, “As per the information currently available, it does not qualify for inclusion in the national treatment guideline. The development of science will decide how we move forward.”

The drug, approved by the Drug Controller General of India, is intended to be used in a very narrow range of circumstances – among the elderly and unrestricted with other comorbidities. Bhargava clarified, “The drug is of no benefit in diabetics, already infected or vaccinated.”

The government also said that drugs have contributed to a large extent in increasing cases of mucormycosis. “There is a guilt that there has been an excessive use of drugs. Steroids impede healing pathways and immunological protection. We are more aware now and we don’t want that to happen,” Paul said.

He said that the general public should be aware of the National Treatment Protocol which has been prepared after much deliberation by the best minds in the field of medicine.

The Ministry of AYUSH also shared its recommendations for the treatment and prevention of COVID during the omicron wave in a media briefing. It has said that based on the research evidence, its Ayuraksha kit can be used as a prophylaxis against Kovid. Apart from recommending ‘kadha’ (Ayurvedic drink prepared from herbs and spices) for COVID patients in the current wave, the ministry has also introduced homeopathy and Unani interventions as well as pills for the management of asymptomatic for moderately ill patients. have also been determined.