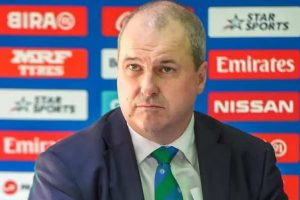 NS International Cricket Council (ICC) has appointed Geoff Allardyce As the permanent CEO of the International Cricket Governing Body. He served as the interim CEO for more than eight months. he replaces Manu Sawhney Who officially resigned from his post in July 2021. Allardyce, a former Australian first-class cricketer and administrator, was the ICC General Manager of Cricket for eight years. He had previously played a similar role in Cricket Australia.