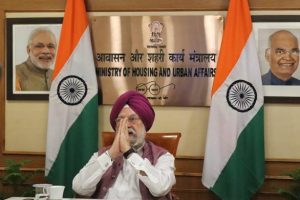 Union Minister of Housing and Urban Affairs and Petroleum and Natural Gas, Hardeep S. Puri unveiled the statue of Rani Lakshmi Bai Feather Maharani Lakshmi Bai college for women, Bhiwani Rohilla In Hisar (Haryana) through video conferencing. Describing Rani Lakshmi Bai as a prominent symbol of rebellion against the suppression of the British Raj, the Minister said that her life has been an inspiration for generations of nationalism and Indian women who fought against the British for India’s independence with utmost bravery, skill and strength. led the revolution. Rule.