Kento Momota and An Seyong win the 2021 Indonesia Masters 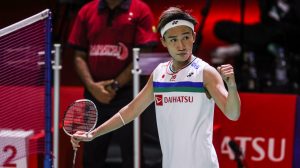