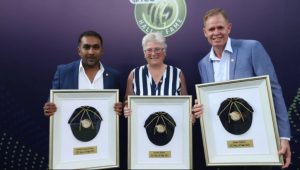 NS International Cricket Council (ICC) Cricket legends announced Mahela Jayawardene (Sri Lanka), Sean Pollock (SA), and Janet Brittin (England) was inducted into the Hall of Fame. The ICC Hall of Fame recognizes the achievements of stalwarts of the sport from the long and illustrious history of cricket. Since its introduction in 2009, 106 players have been included.

Why have these 3 been inducted into the Hall of Fame?