The National Company Law Appellate Tribunal (NCLAT) on Wednesday set aside the Mumbai Bench of the National Company Law Tribunal (NCLT) order that had approved the resolution plan of Videocon Group by Twin Star Technologies of Vendetta. It has referred the matter back to Videocon’s Committee of Creditors (CoC) to complete the Corporate Insolvency Resolution Process (CIRP) as per the Insolvency and Bankruptcy Code (IBC).

“…we have come to the conclusion that Section 30(2)(b) of the Code has not been complied with and, therefore, the approval of the Resolution Plan is not in accordance with Section 31 of the Code”, two-judge Jarat Kumar Jain And a bench headed by Ashok Kumar Mishra said in its order.

“Accordingly, the approval of the resolution plan by the CoC as well as the Adjudicating Authority is set aside and the matter is referred back to the CoC for completing the process relating to CIRP as per the provisions of the Code,” he said.

Gopal Jain, counsel for Twin Star Technologies said, “…it will further delay the resolution of Videocon.” A source aware of the developments said Twinstar may challenge the NLCAT order in the Supreme Court.

Further, even the consenting financial creditors had moved the appellate tribunal, contending that they would face an unprecedented cut of 95 per cent and a large amount as a result of the Adjudicating Authority (NCLT) and the observations of this appellate tribunal. feel compelled to reconsider their decision in public interest. Grant of interim adjournment. 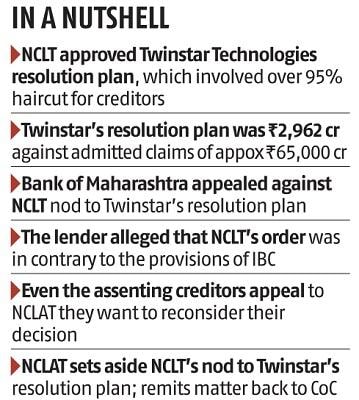 In June last year, the Mumbai bench of the NCLT had approved the resolution plan of Twin Star Technologies, a promoter arm of Vedanta Resources Group, for Videocon Group. But it had pointed out that the successful resolution applicant is “paying almost nothing” as the amount offered is only 4.15 per cent of the total outstanding claim. It noted that the haircut was 95.85 per cent for all creditors and suggested an increase in payments to both the Committee of Creditors (CoC) and the successful applicant. In the Videocon case, out of the total claim amount of Rs 71,433.75 crore, the claims accepted were Rs 64,838.63 crore, and the resolution plan approved was only Rs 2,962.02 crore, which was only 4.15 per cent of the total outstanding. The claim amount and the total deduction to all creditors was 95.85 per cent.

The appellate tribunal also held that the adjudicating authority failed to consider the submissions of the appellant (Bank of Maharashtra), as a result of which the order is prima facie illegal and contrary to the prescribed provisions of the Code and the rules made thereunder.

Bank of Maharashtra, in its submission, had said that the resolution plan of Twin Star Technologies provided the bank a value which was less than the liquidation value of the corporate debtor, hence it was against the provisions of IBC, specifically Section 30. Further, the bank said that as per the disbursement sheet, the amount payable to dissatisfied creditors was Rs 114.21 crore, while due to some discrepancy the amount due was appearing as Rs 105.23 crore. The appellant had alleged that the resolution plan provided for payment by way of non-convertible debentures (NCDs) and equity to aggrieved financial creditors, which was not permissible under IBC.

Business Standard has always worked hard to provide updated information and commentary on events that are of interest to you and have wider political and economic implications for the country and the world. Your encouragement and constant feedback on how to improve our offering has only reinforced our resolve and commitment to these ideals. Even during these difficult times arising out of COVID-19, we are committed to keeping you informed and updated with relevant news, authoritative views and scathing comments on relevant relevant issues.
However, we have a request.