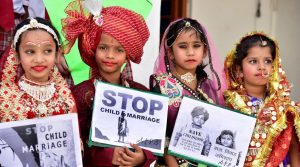 Ganjam had started a program called Nirbhaya Kadhi (fearless bud). The heads of all educational institutions have been directed to inform the administration if any girl between the age of 12 to 18 years remains absent from school for five days. At least one lakh adolescents have been counseled in the last two years. The administration has also made mandatory submission of Aadhar card for any marriage.