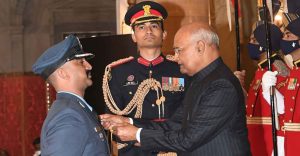 President of India, Ram Nath Kovind Presented gallantry award and Distinguished Service Decoration in Defense Decoration Ceremony Rashtrapati Bhavan. Gallantry Awards have been instituted by the Government of India to honor the acts of bravery and sacrifice of officers/personnel of the Armed Forces as well as other forces legally constituted and civilians. The order of precedence of these awards is Vir Chakra, Kirti Chakra and Shaurya Chakra.

group captain Abhinandan Present In February 2019, he was awarded the Vir Chakra by President Ram Nath Kovind for his role in pushing back Pakistan’s fighter jets. Abhinandan Varthaman was then the Wing Commander. In the ensuing aerial combat, he shot down a Pakistani F-16 fighter plane on February 27, 2019.

President Kovind awarded Kirti Chakra (posthumously), the second highest peacetime gallantry award, to whom? Sapper Prakash Jadhav To neutralize terrorists in an operation in Jammu and Kashmir. His wife and mother received the award.

The prestigious awards are usually presented by the President to the awardees/Next-of-Kins (NoKs) at the Defense Decoration Ceremony held at Rashtrapati Bhavan in New Delhi. Gallantry awards are announced twice a year, first on the Republic Day and then on the Independence Day. The order of precedence of these awards is Param Vir Chakra, Ashok Chakra, Maha Vir Chakra, Kirti Chakra, Vir Chakra and Shaurya Chakra.