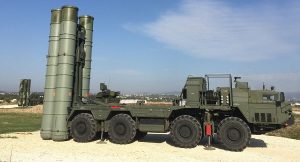 Russia has successfully tested its new s-500 air defense missile system, from a southern training range, Kapustin dude, On July 20, 2021. It hit a high-speed ballistic target as planned. The S-500 missile system is being developed by the Almaz-Antey Air Defense Concern. After the successful completion of the tests the first S-500 systems also known as Triumpheter-M and Prometheus will be placed at an air defense unit outside the city of Moscow.