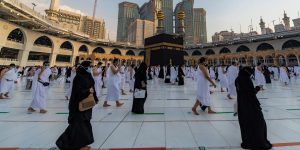 According to Ministry of Hajj and Umrah, Saudi Arabia, Women can now register for the annual Haj journey without one Male guardian (ointment). In the Haj registration guidelines for domestic pilgrims, the ministry highlighted, women do not require a male guardian for registration and can register with other women. Women wishing to perform Haj will have to register in person.

India had announced this rule in 2017 When Modi government announced that women can go for Haj without male companions. Muslim women were also exempted from the mahram and lottery system.

It is an annual Islamic pilgrimage Mecca, Saudi Arabia, Which is considered the holiest city for Muslims. Hajj is an obligatory religious duty for Muslims which is mandatory for all adult Muslims to perform at least once in their lifetime.