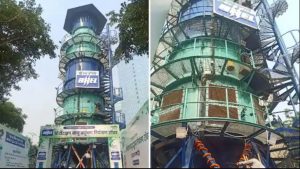 Union Minister of Heavy Industries Mahendra Nath Pandey Which state’s first air pollution control tower has been inaugurated? Uttar Pradesh Noida. NS Air Pollution Control Tower (APCT) Prototypes powered by the state . is developed by Bharat Heavy Electricals Limited (BHEL). The indigenously developed APCT has been set up between DND Flyway and Slip Road to Noida Expressway. The tower will help in reducing the problem of increasing air pollution in the city.

The tower will clean the polluted air around it and release the purified air. The tower equipped with intake and exhaust fans will initially run with the help of electricity. The authority, however, later plans to run the tower with the help of solar power.